What do you do when you suddenly find yourself overwhelmed by the throng of sweaty hipster/fratboy/randoms trolling 6th Street for free shows and booze?

But if you’d thought ahead, you’d have made a reservation at Midnight Cowboy, Austin’s latest hand-crafted cocktail spot. Yes, it’s reservation-only. And, yes, it’s in the same spot as that creepy not-just-massage parlor that got busted last year. They even kept the name.

But instead of feeling like a seedy former-brothel dive bar, Midnight Cowboy is like being transported to Boardwalk Empire. The lights are dim. The music is old-timey. You aren’t supposed to chat on your cell phone. And soft-spoken, mustachioed bartenders make very grownup drinks tableside.

It is the perfect antidote to over-SXStimulation. 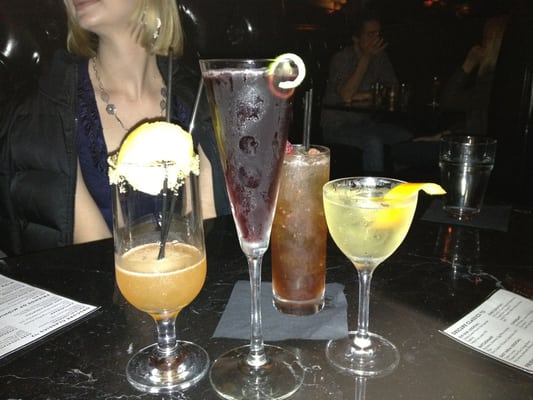 Thanks to yelper Tiffaney L B. for this pic. I was too busy drinking to take one.

Just got a demo of Google Schemer. Looks like a cool way to find things to do, save them, compare to friends and do stuff in real life. It’s one of many examples of virtual leading to actual. I think that’ll be the next big push in digital and why mobile is so key.

I’d write more but there’s a Bloody Mary with my name on it.

You can join with no invite at schemer.com/join. It’s so easy to get stuck. Stuck complaining about the assignment that keeps changing. Stuck angry that someone else is screwing up your project. Stuck focused on the stuff that isn’t going as planned. Stuck wishing things were different.

Everywhere I’ve ever worked (and it’s been three industries, so don’t think ad agencies are different in this regard), I’ve seen people get caught up in this way of thinking.

But all that does is keep you stuck.

Yesterday, the Change Happens: Improv for an Unpredictable World session, led by Amanda and Jordan Hirsch of THINK IMPROV was a great lesson in unsticking.