One of the great things about the holiday season is surprises, especially surprises for the kick-ass city you get to call home. When we were thinking about what to do for our holiday card this year, we decided we wanted to give back to Austin. We wanted to play Santa. So we gifted the city of Austin a custom Daniel Johnston mural, kicking off the season of giving with a bang. Austin mayor Lee Leffingwell formally accepted the mural, located at Austin institution Nau’s Enfield Drug on West Lynn, in a spiffy ceremony alongside Austin art (and hamburger! And milkshake!) aficionados and our own CEO Duff Stewart.

END_OF_DOCUMENT_TOKEN_TO_BE_REPLACED

Balloons, snow and music from Lord Huron. Oh, and a beautiful diamond engagement ring. What more could a girl ask for? Our latest work for Zales pulls at the heartstrings and tells a compelling love story–without words.

Production took place in New Zealand, and Creative Director Will Chau risked life and limb (ok, maybe he just took his gloves off for a second… but it was cold!) to bring us these sketches from the set. Sketching things out sometimes is the clearest way to think. Here are some visuals about life, liberty and the pursuit of advertising. Sketching things out sometimes is the clearest way to think. Here are some visuals about life, liberty and the pursuit of advertising.
By Robert Lin Sometimes it can be hard. Really hard. Unless it’s brilliant. Then it was easy. Wasn’t it?
Sketching things out sometimes is the clearest way to think. Here are some visuals about life, liberty and the pursuit of advertising.
By Robert Lin Assemble the s’more, taking care to thoroughly melt the chocolate by applying the toasted marshmallow. Choose a sturdy graham cracker to support the entire structure.

Beginning in February 2013 I attended the Texas Photo Roundup, LA Fotoworks and the Palm Springs Photo Festival. It’s been two weeks since I returned from my last photo review/photo festival so, it is time to compile all that I have experienced and cherished. Photography is my passion, and every time I’m able to focus on the medium I get motivated and inspired all over again. Participation is also motivation because I’ve seen the most amazing work, met the most amazing individuals and reunited with colleagues (now friends) from past events. Plus, it’s a great way to finally put a face to a name, and means networking with other agencies (JWT, Carmichael Lynch), art producers (Kaia Hemming, Sandy Boss Febbo, Bonnie Butler Brown), photo editors (Leslie Baldwin, Texas Monthly) and photo reps (Norman Maslov, Marianne Campbell, Mollie Jannasch), and find those “emerging” photographers (see list below). Most importantly, I’ve found it to be my opportunity to help educate and guide younger photographers who are diving into a very competitive industry.

The reviews are very much like what I pictured speed dating would be like; 1-on-1 every 20 minutes, and to be frank: you may or may not like what you see or who you meet. The photographers pick their reviewers; however, participants like myself have no idea who we’ll be speed dating with. What’s great is that the photographers have a chance to meet with a handful of influential photo professionals in a short period of time without the hassle of running around town or city to city. It also gives the reviewers a chance to meet with photographers beyond their website and phone calls. I personally like meeting photographers in person because it gives me a sense of personality, who we as an agency could potentially be collaborating with, and if they’re a good fit for possibly a long relationship.

Between the three reviews, I found a growing trend of photographers doing stills and video, and as an agency we are doing more and more integrated shoots– and so are producers. If you’re on the fence about attending, the benefits are seeing a small glimpse of emerging photographers, provides exposure for GSD&M, and keeps us up-to-date on current trends in the industry.

Below are a few of the photographers I found captivating. Not all were commercial photographers. Some had a story to tell that I felt was worth passing on. If you want my complete list, please feel free to send me an email. (Winner of the 2013 PSPF Portfolio Review)

Melissa is a young photographer out of Atlanta in which she shoots most of her sets in her unfinished basement. She has funded and produced (including casting and set design) all the work seen on her site.

I liked David’s demeanor. He was relaxed, resourceful, works with a small crew and shoots video.

“Bedrooms of the Fallen” 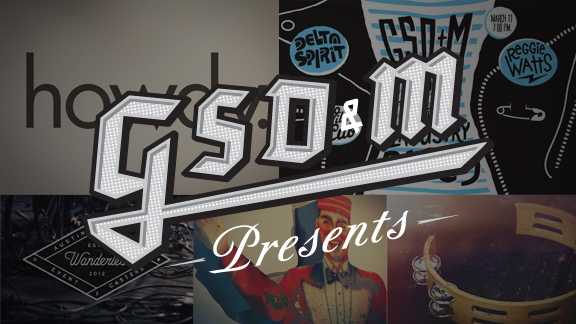 Follow all of our updates for SXSW and beyond at our new site: http://www.gsdmpresents.com.

Full disclosure: Alex Roka and Joel Parr, interviewed in this post, are both fulltime employees of the agency and resident BAMFs. I interviewed them because I think their side venture is pretty awesome. I did not accept any bribes of briefcases full of cash, bottles of nice wine or unconditional love. Now you know.

Living in Austin gets exhausting. Every weekend there’s a new festival,  art opening and underground concert you should be at. And with the added social media FOMO epidemic, things are only getting more hectic. Am I properly taking advantage of all my city has to offer?

Roka is a designer at GSD&M and came up with the idea with his roommate DeGennaro while struggling to find an event during last year’s Wurstfest. DeGennaro, who works for Emo’s , felt like there were lots of events that were going unnoticed throughout the city. They saw a need for an events site that was filtered well and presented in a pristine way.

A few months later, they had a business plan, a name and Roka got to work on the design. The logo alludes to the Austin tattoo culture with everything handrawn. As “eventcasters for the future”, he was inspired by the mystical nature of tarot cards and magic. Before the site even launched, his logo was picked up by Designspiriation. For the site design, they wanted to keep it clean, intuitive, and easy to navigate, “Apple functionality meets Pitchfork aesthetic.” With help from GSD&Mer Joel Parr, the Beta site was developed and ready for launch last week.

The team of three wanted the site to be used across different devices. “You don’t always have your computer in front of you when you’re looking for something to do, so we created a site that could be easily viewed on a mobile device too,” Parr explains regarding the responsive design he developed. It was important to them that the site remained simple without letting it become too cumbersome by trying to do too much.

And that’s exactly what it does. With three categories (music, film and arts & culture), you can sift through the best events Austin has to offer. Their Eventcast gives you their top choices for the day across all categories for week ahead.

DeGennaro says, “We want to have a constant pulse on Austin.” Whether you’re into Formula One Racing or the East Austin Studio Tour, their events cater to all types. It’s important to them that they give exposure to events that normally wouldn’t be on your radar.

So what are the best events in town according to the Wanderless team? Roka loves the Cinema East screenings. Parr enjoys all of the events around the East Austin Studio Tour and anything presented by Learning Secrets.  DeGennaro thinks the UT Visual Arts Center is oftenoverlooked and often has many great , free exhibits. Whether you are trying to prepare for the festivities of this upcoming weekend or just looking for a Wednesday night activity, Roka and DeGennaro want to help. Keep an eye on the site as these guys are hoping to continue eventcasting to bring a refined social calendar to the fine folks of Austin.

Creative ideas take many forms. These days, a lot of creative work is digital and social. But at GSD&M, we still love making things by hand whenever we can. And nothing is quite as satisfying as the happy little accidents you get from screen printing. We’re lucky to be in a town where that craft is alive and well. Here are a few of our friends who are doing it every day.

Thanks to our friends at Industry Print Shop, Coronado Studio, Sanctuary Printshop and Nakatomi Inc for letting us in on your craft.

You can find more about the designs from GSD&M and other local Austin artists on our Pinterest boards here:

I’ve been on the animated GIF bandwagon ever since I saw this during the GIF resurgence of 2007.  I find any excuse to embed them in emails, blog posts or daily conversation. They provide 4 seconds of awkward animation relaying a moment in time that relates (or doesn’t relate) to whatever emotion I’m trying to convey. The recent popularity of What Should We Call Me and When In (insert various cities/colleges/cult gatherings) are bringing GIFs mainstream again and I’m not even mad about it.

Here at GSD&M, the GIFs have been a core part to our website. For last year’s redesign, we asked our employees to take a series of photos to be featured on GSDM.com – Buster Bluth style. Employees racked their brains and took their turns working it for the camera.

Check out the video below to learn about the history of the GIF from PBS. Spoiler alert: They tell you how to pronounce GIF and it’s pronounced like the peanut butter Jiff. And you can take it one step further by making your own GIFs with apps like Cinemagram and GIF Shop.

Which are your favorite employee GIFs on our site? Comment below.