As the Cannes Lions Festival kicks off this week, marketers and agencies across the globe are anxiously awaiting to discover who will take home the 2015 awards across the Health, Lions and Innovation tracks. “The Cannes Lions will recognize and award the year’s most exciting creative ideas across 20 categories, covering everything from traditional print and film communications to technology and product design,” according to canneslions.com. Ideas and brands will be recognized and celebrated, in addition to introducing new creative ideas for the upcoming year. 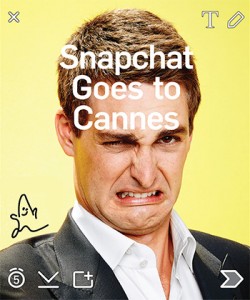 This year, the spotlight is on Evan Spiegel, CEO of Snapchat. Today at Cannes, Spiegel introduced what could become the most efficient, influential and useful media platform. Spiegel took the main stage to discuss his plan to open his company up to marketers, which is predicted by many to take the advertising world by storm. Discover partner and Cosmopolitan Editor in Chief Joanna Coles interviewed Spiegel onstage earlier this afternoon about creativity, millennials and what he thinks will excite this generation next.

Spiegel went into detail on the creation of Snapchat: four years ago in a college dorm room at Stanford with a few of his fraternity brothers. He goes on to discuss how “Snapchat is trying to incorporate relevant advertising without being creepily targeted in the messaging.” He touches on the importance of retaining the anonymity and privacy of users while still providing the tools advertisers need to be effective. Spiegel discussed that brands now have the ability to sponsor videos, location-based filters that viewers use when they are within a certain geographic area. He also highlighted the newest advertiser taking part, which is Procter and Gamble, who sponsored Snapchat’s Father’s Day story live-stream. A lot of today’s crowd was just getting introduced to Snapchat, but this talk left both Spiegel and the audience confident in the progression of this app and what it will do for the advertising world, according to Garett Sloane of Adweek. What is especially worth noting is that, even just a couple of years ago, Snapchat would never have been deemed credible enough to be featured at Cannes. The brand’s evolution is extraordinary. What started as a peer-to-peer-image-sending app soon grew to incorporate video, location and visual graphics. Snapchat then went on to tackle texting by adding a messaging platform. Most recently, Snapchat added the “discover” button to keep its users up to date on news and current events through select media partners like Comedy Central, ESPN, Daily Mail, Cosmopolitan and VICE. In just four short years, Snapchat essentially has it all. It has the ability to take market share away from WhatsApp, Facebook, Instagram and even Twitter—which is what makes it so appealing to advertisers. It is not a once-a-day use application, it is a 20-per-day use application; this user frequency is advertising gold.

Brands can replicate this style of user behavior to better engage with the Snapchat community. Brands could essentially take more risks in their advertisements if they appeared on Snapchat. They could create humorous ads that could be viewed for that allotted time, and it would disappear. I also think the quick viewing of an advertisement would make it more appealing to users because it’s an interactive video that would only take 10 seconds to watch, rather than interrupting you for 30 seconds to a minute, like YouTube video ads. Because of poor planning, some advertisements come up at an inconvenient time and are too lengthy, causing viewers to be agitated rather than intrigued. If marketers played around with this idea by making the message visually appealing, humorous and/or playful for this younger audience, I think this could be a very successful outlet. Whether it’s a quick snap of a delicious Chipotle meal, or a five-second video of someone trying to shove a burrito down in one bite, it enables viewers to keep the brand top of mind. Recently, Snapchat showed its powerful impact during ABC’s broadcast of the American Music Awards. Three million viewers tuned in, while Snapchat Live Story broadcasted snippets of the event and drew in 11.5 million viewers, according to the Adweek article, “How Snapchat’s CEO Plans to Conquer the Advertising World. His first time at Cannes, Evan Spiegel is already star of the show.” As Snapchat continues to increase its user base and expand content options, advertising is starting to become part of this platform, as introduced today by Spiegel himself. Both Spiegel and Cannes Festival attendees seem excited to see what direction Snapchat could steer advertising and ideas, if anywhere at all.