This is a tale of two musical pioneers who received posthumous acclaim, and about the unexpected bedfellows of advertising and music.  Wikipedia utilized to provide relevant, titillating details. 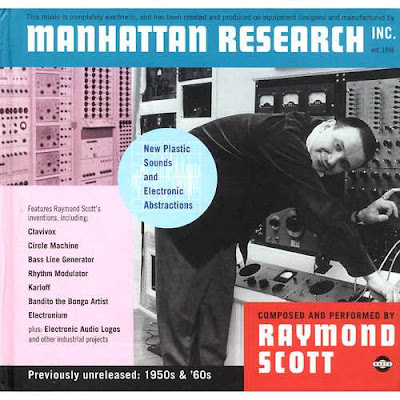 Back in the 60’s, there were large agencies like PAMS that cranked out canned audio jingles for advertisers or media companies to repurpose for their products on radio, television, or even for segues between programming.  There are hundreds of thousands of these samples sitting in disorganized archives all over the country – most of which have not been sorted through, published, or digitized.  The little that has emerged has been rich fodder for experimental musicians and modern day broadcasters.

In 2000, Basta Music of Holland released Manhattan Research Inc. – a 2 disc compilation of samples created by American composer Raymond Scott in the 50s/60s.  This quirky compilation included jingles for a bevy of companies, along with Scott’s own experimental sounds.  Scott was preoccupied with using technology to engineer new, futuristic sounds.  He developed many innovative modifications with synthesizers, sequencers, and drum machines to create sounds that had never been heard before.  He heavily influenced Bob Moog, developer of the infamous Moog Synthesizer, who designed circuits for Scott in the 50s.On Manhattan Research Inc., the voices and taglines evoke the same strange nostalgia you feel when watching old commercials (“Make a melonball bounce with Sprite!”  “Don’t beat your wife every night – chew Wrigley’s!” “Every spaceman knows you just gotta have Hostess Twinkies along – even spacegirls know it!”).  But the accompanying electronic music on top of these taglines makes for surreal listening.  Some of the sounds are mid-century imaginings of the future (complete with theremins), but for the most part, the bleeps and bloops still provide that ethereal, other-worldly possibility that electronic music does so well.

Many of these samples have been used in modern-day cartoons (Ren & Stimpy, Simpsons, bumpers for Adult Swim), but they’re most interesting when put in the hands of a master hip hop producer such as J Dilla.  Representing Detroit in the mid-90s, J Dilla produced iconic tracks for hip hop legends A Tribe Called Quest, De La Soul, Common, The Pharcyde, and others.  However, J Dilla’s own solo projects, which didn’t gain popularity or recognition until after his tragic death in 2006 (complications from lupus at age 32), were undeniably his most innovative, adventurous creations.  His crowning achievement, the album Donuts, created mostly in the confines of his hospital bed with a small sampler and record player, sampled Raymond Scott’s work.  The catchiest sample is Lightworks, which I’ve linked to below.

Why does this story matter?  Why do I want to share it?

Selfishly, I love hip hop and will proselytize the good stuff until everyone can appreciate the craft.  Most people have no idea that hip hop – really good, thoughtful hip hop – is made by geniuses who spend hours and hours researching, digging, getting their fingers dusty as they flip through old vinyl.  They breathe new life into old music and have an ear for great sounds on old records that were never even popular.  So many elements of our culture today (memes!) are based on reimaginings and mash-ups of something old, something new, something popular, something obscure.

Less selfishly, this story has great applications for anyone who is working in any job that requires creativity.  If you put your heart in it, what you do matters, even if you’re not recognized for it.  Raymond Scott never guessed that his work would be used this way.  Advertising wasn’t Scott’s passion, but he used it as a medium to do what he really wanted to do – make music.  I think for art directors, copywriters, and anyone involved with actual creation of ads, this is second nature, but I don’t see why anyone in any field can’t try to find a way to do this.  Hell, I work in media, but I’m writing about hip hop on my company blog.

See below for examples of music from Scott, and samples of those tracks from J Dilla:

Sampled by J Dilla: (starts teasing it at the 1:30 mark)  (video no longer available)

Here’s a great write up of the Donuts album (Amazon.com editor review): “…the songs here are less finished and polished pieces and more caught up in mid-creative motion. Unlike the soft, filtered sound he was known for in the mid-1990s, for Donuts he leaves a variety of soul and jazz loops in plain view but splices and reworks them as a set of sonic jigsaw puzzles. Spontaneous but not sloppy, the capture the late producer at his best–in the throes of his own imagination, each song poised with endless possibilities.”