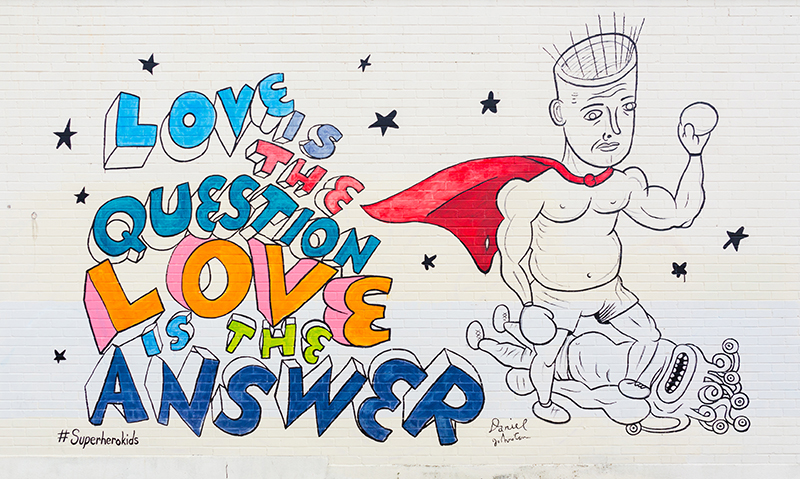 One of the great things about the holiday season is surprises, especially surprises for the kick-ass city you get to call home. When we were thinking about what to do for our holiday card this year, we decided we wanted to give back to Austin. We wanted to play Santa. So we gifted the city of Austin a custom Daniel Johnston mural, kicking off the season of giving with a bang. Austin mayor Lee Leffingwell formally accepted the mural, located at Austin institution Nau’s Enfield Drug on West Lynn, in a spiffy ceremony alongside Austin art (and hamburger! And milkshake!) aficionados and our own CEO Duff Stewart.

Everyone in, out and around town knows and loves local artist and musician Daniel Johnston’s famous “Hi, How Are You?” mural on Guadalupe, St., so it only seemed fitting to provide residents and visitors with another Johnston-created art landmark – his first in 20 years. Why did Johnston come out of seeming mural retirement for GSD&M and the city?

Well, this mural was also created to help kids—specifically the Superhero Kids charity that assists the patients of the Dell Children’s Blood and Cancer Center. Beginning December 1 through the end of 2014, GSD&M will make a donation to Superhero Kids for every photo taken in front of the mural and posted to social channels with hashtag #SuperheroKids. Limited-edition T-shirts will also be on sale at Nau’s and online at GSDM.com, with a portion of the proceeds benefiting Superhero Kids.

So yeah, take that, Santa. This is what the holidays are all about!

See a video about the mural and buy a t-shirt here.