“Subway introduced it, Chipotle perfected it and pizza restaurants like Blaze are really evolving it,” says David Tristano, evp of Technomic, about the cook-to-order evolution. 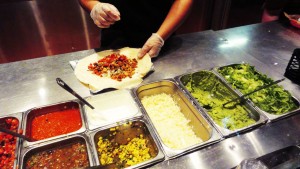 New restaurant concepts have instigated an evolution from fixed foods to fix your foods, a phenomenon that personalizes our taste buds. Customization plays an essential role in build-your-own-meal establishments. While reading the article “The Power To Shape Your Experience,” I had an epiphany: everything I experienced that day was customized—the animatic record I sat in on, my Chipotle bowl for dinner and this article I found on my feedly.com filtered homepage.

Drafting a storyboard for a commercial, known as an animatic record, is like a Chipotle-catered lunch at GSD&M. Last week I had the privilege of sitting in on an animatic record at Pony Sound with a GSD&M account team. Sitting across from a daunting computer screen with a surplus of buttons, I never would have compared it to the mouthwatering buffet of ingredients at Chipotle, but the process of picking and choosing what sounds to include in a spot echoes the process of customizing a meal to my taste buds.

During the record, I learned that the writer and producer choose the sound based on the intended spot’s tang. For instance, certain commercials may consistently convey a sweet-loving flavor throughout them. On the other hand, the account managers build the spot to correspond with the client’s palate. For instance, a writer might think take C had better inflection on a word than in the previous takes. And sometimes editors might use the first sentence from take A and the second sentence from take C. This splice can easily mirror a half-chicken/half-steak order at Chipotle. It is all very personalized.

Once everything is recorded, the sound editor mashes the ingredients into a final spot. Each line piles onto the voice preceding it. While each voice is recorded separately, in the same way each topping is cooked individually, it is the combination that is ultimately served.

After the voices are placed in the order of the script, music must be chosen. Similarly, while I am not a green chile salsa fan, I always ask for a side of the Chipotle vinaigrette because it complements the rest of my concoction. However, when I am in the mood for something milder—in this case background noise—sour cream will suffice. The sound editor is the master of the finishing touches.

In the article, Carl Chang, founder of Pieology Pizzeria, concluded, “Many people like me are Food Network fans, and they love being exposed to how our food is prepared and our technique.” True. As a kid, my grandpa would take me to Krispy Kreme, and I would stand with my greasy hands plastered to the glass watching the doughnuts graze across the conveyer belt. I devoured the doughnut with a sense of pride and insisted on showing off my icing expertise at show and tell the next day. Watching how something is made empowers a person. It makes the mundane and tedious work behind the scenes a little sweeter. Fifteen years later as an intern, I plastered my hands to the recording glass while watching the evolution of an animatic record. I was mesmerized by the process as a whole.

To take this one step further, which may be exhausting my analogy too much—my apologies—as interns at GSD&M, we have “the power to shape OUR experience here.” Fill in the blanks. “Our universities introduced us, GSD&M perfected it, and we are evolving it.” I am looking forward to a great summer.