Would it really be Valentine’s Day without a love story?

This year, GSD&M is helping Southwest share its heart with the city of Atlanta with a campaign that features the new heart logo in TV, print and more. 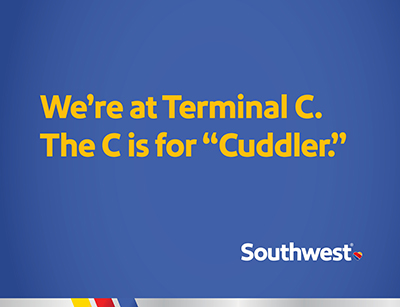 Atlanta is a city that Southwest has had its eye on for a while. Now thanks to the completion of the AirTran merger, we’re ready to show Atlanta what Southwest is all about.

You’ll see it quite literally in the AJC, on the MARTA, and of course in the smiles of Southwest employees. In fact, the new spots feature real Atlanta employees.

Also, we didn’t sponsor the Grammys last Sunday. (That was that other Atlanta airline.) But we stole a good bit of the show with a spot that aired locally in the 404. A remix of one of our national spots featured music from none other than Atlanta’s own Outkast.

In partnership with Southwest, we’ve got more surprises coming later this month. So if you’ve got someone special in your life who lives far away, now might be the perfect time to go buy a plane ticket. (Or at least pick them up from the airport.)

It’s been called Hotlanta. But for at least this month, we’re proud to call it Heartlanta.